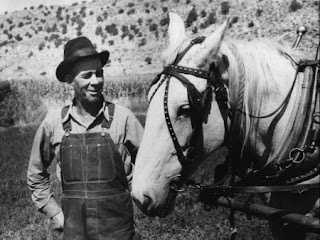 Before I moved to Oriental NC, I was a school teacher in Raleigh NC. When the last bell rang on Friday, I use to race the students out of the school, jump into my car and drive to Oriental. I had been coming down here since the late 1970's and knew the roads blind folded, or so I thought.

One time, I was not paying attention and my car ended up into a ditch. I was fine but my pride took a bump. I called on a farmer for some help. The farmer said, "You'd need a team of young stallions to pull up that car. I only have one horse, Fred. He's blind and old. I'll bring him over to the ditch and we'll see what we see. But don't expect much." The Farmer hitched Fred to my car, snapped a whip in the air, and said, "Pull, Jimmy, pull!" Fred never moved. The farmer snapped the whip again and said, Pull, Sammy, pull!" Fred still didn't move. The farmer snapped the whip a third time and said "Pull, Charlie, pull!" Fred remained still. The farmer snapped a whip the fourth time and said, "Pull, Fred, pull!" With one mighty tug, Fred yanked my car out of the ditch.

Perception. Don't let yours limit you. Although some of us are old, none of us are blind, imagine if we all pulled together what we could accomplish.

Please drive safely. I hope to see you and your family at the Pecan Grove Marina.